Collagen VS Gelatin – The Myth To Solve

COLLAGEN VS GELATIN, THE MYTH TO SOLVE

Kosher Gelatin: Is It Halal or Haram? 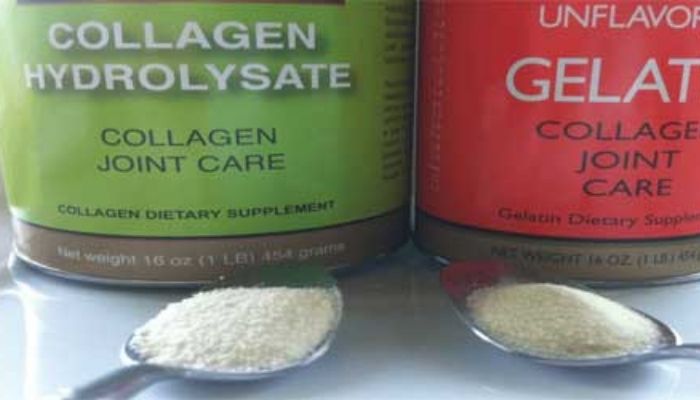 It’s always a topic of debate between the people that whether there is a difference between Gelatin and Collagen or not. Most people think that both are the same with respect to all the points but the opinion varies too. We will discuss the difference between Collagen vs Gelatin in our review.

Both collagen and gelatin have most properties similar but their nutrition value and culinary use vary from each other. They both are prepared and processed in different ways.

The main physical property that varies is the gelatin and collagen is the gelatinizing property of gelatin. The collagen, when added to the liquid result, is rapidly dissolved whereas when gelatin is added, needs a proper heating time to dissolve then it is gelatinized at a cool temperature to form a jelly material.

Before proceeding to know the difference between the collagen and gelatin, we should know the individual properties of both of them.

The confusion that arises between collagen vs gelatin is because of their two different forms of the same thing. They both are initially derived from the same origin but further their different use divide them into two forms.

WHAT IS THE PHYSICAL APPEARANCE OF COLLAGEN?

Structurally, collagen is as a tough, elastic protein. The structure is complex and versatile.

Where It Is Found In?

It is found in tissues of the skin, joints and ligaments, and tendons. It is mostly available in connective tissues.

What Is The Use Of Collagen?

Collagen has been essentially used for health and without having the proper required amount of collagen we can die.

However, if our body is not producing enough collagen, you need to have the required amount in your diet. There are many diseases which can occur in our body, due to lack of collagen in the body.

The amino acids also like proline, glycine, and arginine are assembled in our cells. These amino acids can be easily added to our diet and are very important for us.

How It is Made?

The process of slow heating results in gelatinized form, jelly. Just when we whipped the egg and the ruled beaten eggs can never be turned into yolk and egg whites again, the process of formation of jelly is the same.

The process called denaturing, in which protein changes its shape. This irreversible collagen becomes liquid and then cool gelatin looks and feels like jiggly and wiggly. When collagen is heated and forms a jelly structure called jell-O.

What Are The Use Of Gelatin?

Gelatin forms best soups and stews. Its gelling property makes it a most used ingredient in recipes. Gelatin is the most important source of amino acids.

Gelatin has many uses. Daily use of gelatin can be an alternative of collagen supplements. Most people like to have it in deserts while some people like it in their basic cuisine.

Gelatin has many health benefits, which mainly include the health of gut, nails, and hair and also help your skin to be more elastic.

Collagen and Gelatin, What is the difference?

The difference between collagen and gelatin is the dissolving tendency of both. Collagen is rapidly dissolved in liquid while gelatin becomes a jelly-like structure when heated in lukewarm water.

Making of jelly from Jell-O packet is easy. It just requires a pot of boiled water and adds it in the packet of Jell-O which results in Jelly formation.

The difference between collagen and gelatin is the dissolving power as collagen doesn’t require boil water and it never forms jelly structure. Addition of cold water in gelatin will result in clumps formation which is not good for cooking.

Both have a different use. Collagen is used as raw material whereas gelatin is added in baking cakes, jellies and even in different beverages, coffee, shakes, and coffee.

Both collagen and gelatin have the same amount of amino acid and protein which promote the skin and nails elasticity and also help your gut to function in a better way and also decreased the joint pain.

I hope the article gives you enough information that will help you to distinguish between collagen and gelatin and to know the exact use of both forms.